It was a stormy night and me ship was rocking to the thundering symphony of the Oceanic Gods. I took out me compass and saw the needle spinning endlessly. This was strange and I wondered where we were heading. The oldest member of me crew, reminisced tales of a sea legend - A magical library. He kept telling me that I will love it. The mates then spotted land nearby and there was surprisingly no storm on that island. Chaos all around the island but peace on it. This be some strange sea magic. I was mystified about this island. My heart beat faster in anticipation.

The traffic is always chaotic and annoying on a weekday night when Mumbai's highways and arterial roads are full of vehicles. A fifteen minute journey becomes thrice as long. It was an evening with friends and fellow food folk. All the chaos and irritation ceased to exist the moment I entered Masala Library(ML). Very few places have this effect and ML would be one. 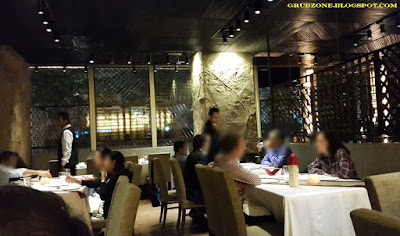 Masala Library is the magnum opus of Massive restaurants and is championed by the legendary Jiggs Kalra himself. The restaurant has a very refined and a dignified appearance. No loud decor or oddities. No experiments with art and the bizarre wonders of contemporary culture. The restaurant was full when I joined my friends and that speaks a lot about its popularity. Indeed, Masala Library is considered by food enthusiasts to be one of the finest places in Mumbai. It is a place that must be visited by everyone who calls themselves an epicure of any sort.

A long journey makes a sailor(and everyone else for that matter) quite hungry so the evening course started right away. Masala Library calls itself a place that serves progressive Indian cooking. The Indian delights with western influences and Molecular gastronomy prove just that. Masala Library is a place where each dish is like a book and each page symbolizes the culinary depth of the dish. Well time for a long read then, eh? 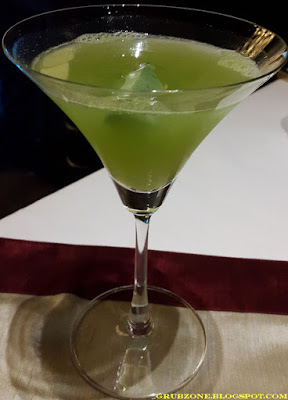 Burnt Curry Leaf Martini - A fusion of the east and west, this martini was filled with the flavor and color of Kaddi Patta or Curry leaves. An interesting taste though a little bitter due to kaddi pattas natural flavoring. 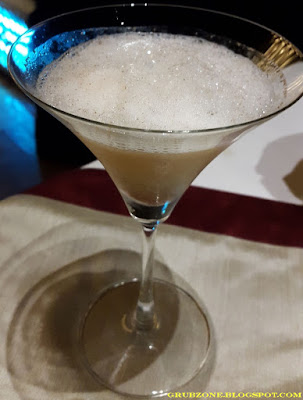 Star Anise Martini was clearly a better martini in comparison. Sweet, fragrant and potent would be the easiest way to describe it. I quite enjoyed it due to my fascination for food and drinks with a perfect infusion of Anise. 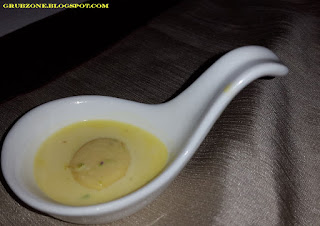 Before the course started, our group was served with this Amuse gueule. This was made of a "pop in your mouth" Thandai balloon. Masala Library is known to be one of the most proficient users of Molecular Gastronomy in the country. Those techniques were used to make this Balloon.

We were served with a Chef's Tasting menu which is a regular feature in their menus. 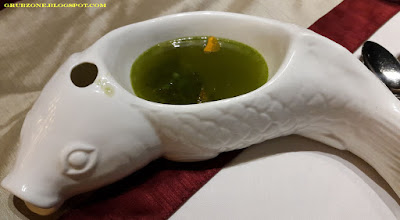 Steamed Patra ni Macchi with coriander shorba was a fusion soup made of steamed basa(cooked in Parsi style) and coriander clear soup with edamame as side. The flavor of the clear soup(shorba) was quite riveting and the basa was completely soaked in the flavor. The fish shaped bowl accentuated the experience. 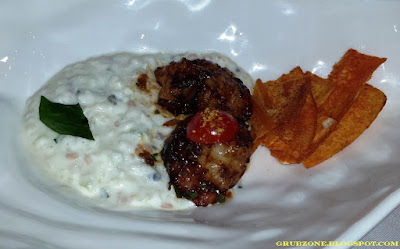 Curry leaf, pepper prawns with Thayir sadam and banana crisps. Thayir Sadam or South Indian yoghurt rice paired perfectly with the crispy prawns. This was billed as a salad but felt more like an appetizer. The banana crisps did not seem to blend in well and acted as an unwanted side. 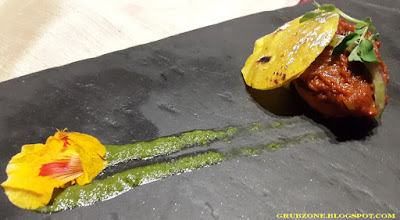 Galawat Kebab with Warqi paratha was a "melt in the mouth" mutton Kebab made using a Lucknowi recipe. Legend has it that it was invented by a royal chef for an aging toothless ruler who demanded mutton kebabs. MLs version was loaded with addicting flavors and was quite aromatic too. The plating was nice but I'd rather have a bowl full of this without any need of presentation. This was easily the highlight among the starters.

Captain : I love this minced delight. I need a bucket full of these.

Crewmate : Yeah, I could use a bucket too.

Captain : Good, that make it two buckets of kebabs for me then.

Crewmate : Don't you mean us? 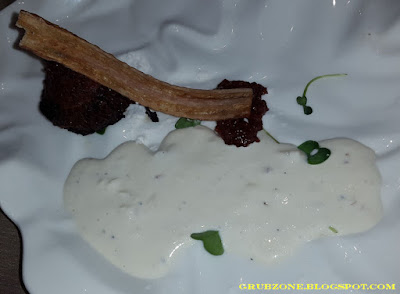 Bacon wrapped Tandoori Morel served with dry Chardonnay carbonara was a fusion of many cuisines. The bacon coat feels amazing as one chews their way down to the soft morel core. The wine kissed Carbonara sauce adds a great finish as well. Food in the image was a tasting portion. 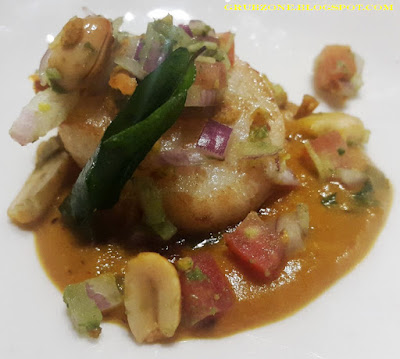 Seared Scallops with Peanut Butter Salan was a delectable dish made out of Norwegian scallops with the South Indian salan curry. The scallops dissolved in the mouth with the peanut butter salan providing smooth and savory sensations on the tongue. This dish was almost like a spa for my mouth. A delight if you are a fellow sea food lover.

Piri Piri Chicken Tikka felt like a classical good tikka. Though it was said to have piri piri rubbed on it, that was probably too subtle to be noticed. It was served with a cumin raita and pink ginger. 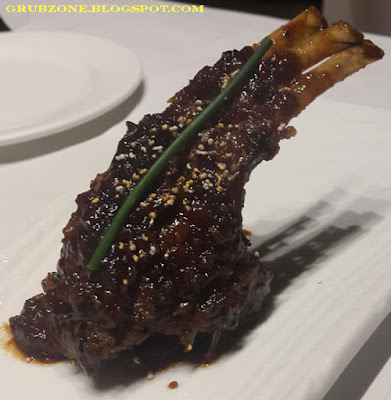 Braised Mutton Ribs - These were braised for four hours apparently and drizzled generously with maple and kokum glaze giving the dish a sweet candied flavor. The meat was soft and full of flavor. This was a risky affair since it combines a popular salty and savory Indian superstar with sweet notes. But it played out well in the end. It was a crowd favorite on the table. 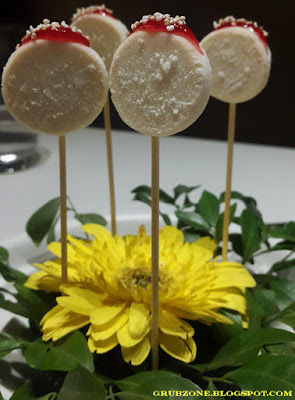 Misti Doi Lollipops served as an intermission between the appetizers and the mains. I have heard so many good things about these and had longed to get me hands on them. These were probably solidified using liquid Nitrogen. Misti Doi is a famed Bengali dessert but its difficult to make it a candy like solid. These sweet and tangy lollipops were quite possibly the greatest lollipop flavor I have had so far. Best palate cleanser ever. These are not to be missed if one is dropping by ML.

Captain : We need to find the restaurant's lollipop vault and grab more of these.

Crewmate : And why should I help you cappy?

Captain : I'll give ya a ten percent cut. 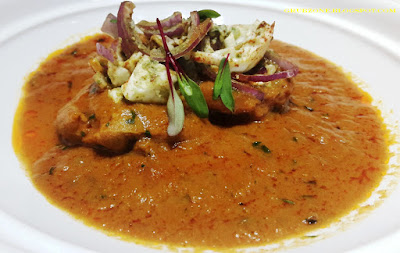 Home style chicken Curry was a passable affair. True to its name, it tasted very much like North Indian style homemade Chicken. The question is why anyone would want to have it at Masala Library. There was neither lavish luxury to it nor any interesting western influences. 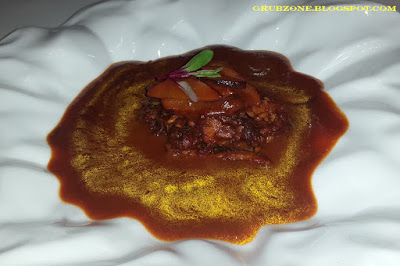 Kashmiri Chili duck - This was a lavish duck preparation with Aloo Bukhara gravy and veri crumbs(spiced crumbs). The duck was succulent and the collage of flavors made this an amazing dish. The duck's flavor formed the outline and colors, Bukhara added a gastronomic depth and the spices added a flavorful variance. My first time with a Kashmiri duck preparation and Masala Library has set the bar high. 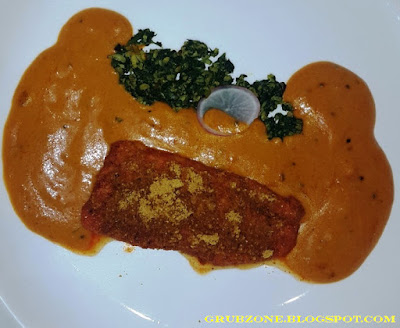 Pan seared Rawas was a delectable preparation of Indian salmon served with South Indian Spinach Poriyal(Stir fried Spinach) mixed with bits of crab. The dish was submerged in Malaya curry which is another South Indian preparation. The dish was a mix of oceanic and terrestrial flavors. It had a natural sea saltiness to it which made the dish enjoyable. 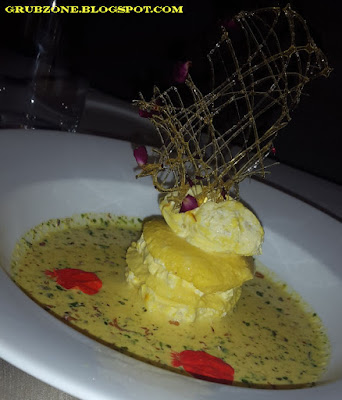 While the desserts had their fair share of plating theatrics, I positively enjoyed the dessert more at PaPaYa which is owned by the ML's parent same group.

The Ras Malai Tres Leches was quite toothsome with its soft silky Malai dumplings stacked together like a Tres leches cake. The Ras(Liquid) was made out of sweet milk with saffron, herbs and rose. A caramel structure was placed on the top of it as well. This one was quite an eye candy and it got over within ten seconds flat on the table.

Captain : Quite a sight this be lad.

Crewmate : Good thing Nina isn't here. She would have lapped up all of that Ras.

Crewmate : But...but she is your Cat Cappy. 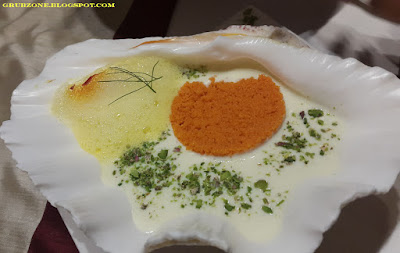 The Jalebi Caviar with Rabdi was a complex affair. I think that there were too many musicians in this orchestra. Jalebi flour had been converted to small spheres using molecular gastronomy and fused to make a disc like structure that resembled granulated Jalabei. The Rabdi was enjoyable. The Saffron foam added to the sweet aroma of the hybrid. But collectively I wasn't too pleased with this one. 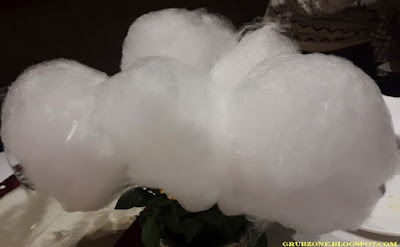 Paan flavored Cloud Candy. I think its better to call it that instead of cotton candy. It resembled clouds with its fluffy white appearance. It was quite enjoyable. While this may not be the Instagrammer's delight in terms of visuals, it had an excellent Paan infusion and I enjoyed this most among the sweet things. It worked both as a dessert and a mouth freshener. A True Budiya Ke baal moment.

The service at Masala Library is exemplary. The servers know their stuff and the floor manager routinely visits tables to describe the food and take feedback.

Masala Library is definitely on the higher side of the pricing scales. Heck, it is even expensive. I see that as the only downside. Still the restaurant was packed at my time of visit and not even a single table was empty. That speaks a lot about the quality of the food.

ML was definitely a fun experience. The food was great and everything else felt of very high caliber. The ambiance was decent as well though they could do something about the musty smells just near the entrance. I would definitely visit again in the future.

"That indeed was something lads. The storm has subsided and me compass has a steady direction too. Flags up and sails out. To the next adventure we must move about."

-I was invited by the Restaurant's PR to sample the grub. However, my review is neutral and free of any biases.-

Posted by Rishabh Mittal at 1:46 am