And the next mark on the map read "Boveda". I wondered what it meant till the quartermaster declared that it meant "Vault" in Spanish. Almost instantly the crew's linguist shrugged and corrected the quartermaster. "Its Galician, a language spoken by a small group near the Spanish Iberia."

The quartermaster not being the one to be slighted responded with a dull "Same thing." And the two lads got into an argument. I walked away in deep thoughts ignoring the two blokes who were quacking like geriatric sea gulls as I wondered what this vault could contain. Then suddenly I stopped and said, "Wait, we have a linguist in me crew?" 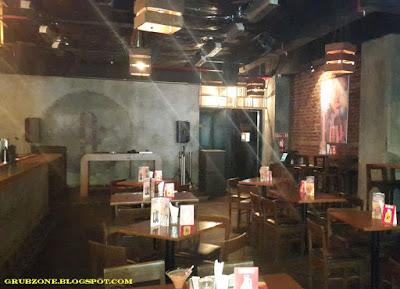 Boveda is a nice little ever-twilight pub located in the food district of Andheri. It has had a reputation for a while of being a night eatery but hey I dropped in at 2:30 in the noon and had quite a nice meal. The place has a very energetic yet comforting pub like feel to it. 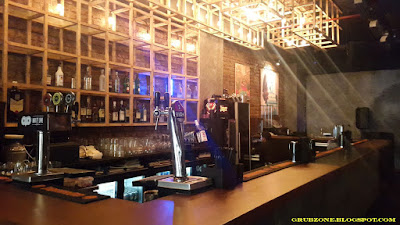 Whether it is the bar which happens to be the most illuminated part of the place or the mixtures of tables, armchairs and couches. Boveda appears like one of those biker bars that I am used to seeing on movies and American shows. It appeals to the traveling epicure such as myself. The decor seemed like a mixture of Bavarian woodwork pubs, modern industrial architecture and a bit of Bohemian artwork(thrown in for good measure). All in all I think the visual elements work greatly for this place. I could imagine it being full of starry eyed revelers at night time.

Chef Saqib works both as the executive chef, occasional mixer and the manager for this place. He is a man who truly invests a lot to put this place on the map. Boveda already had an extensive grub menu but they have also introduced a healthy menu which was what I was here for. 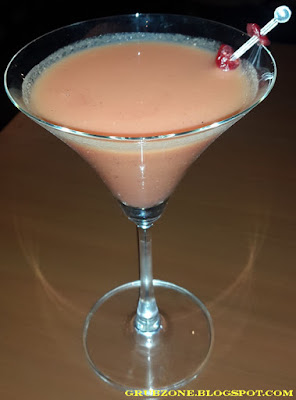 Cranberry Zuppa was a strange soup which was served cold and in a Martini glass. This is thought to be a well known staple in Italy and Spain but I think its quite a delicacy in India. The taste initially felt like the sweet tang of cranberries, which was immediately followed by a salty flavor with shades of garlic and onion. Then a mildly spicy undertone of red peppers appeared at the end. This drink was quite delicious for vegan health food. I would probably have it again if I go to Boveda again. My taste buds do miss this flavor.

Crewmate : This one sure be a mystery. 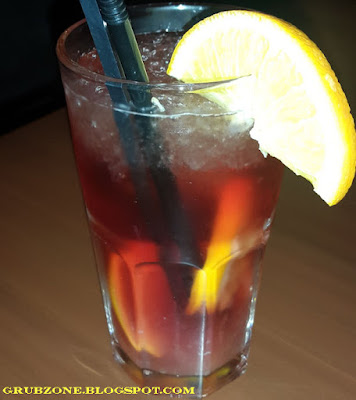 I am not sure what this was actually called. It was a Cranberry drink whose name sounded like Ronella to me. It had Cranberry, pineapple, a bit of lime, mandarin bits and red bull. The taste was refreshing, mostly tangy with a bit of a zingy sweet twist from the Red bull. 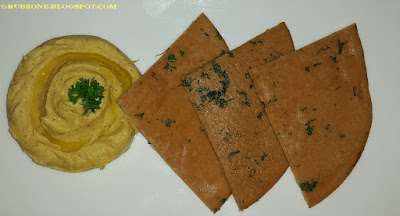 Roasted Pumpkin Hummus and Pita was a humble but a good way to open the grub show. The Pita was made of wholewheat flour hence the atypical color. I am used to having regular Hummus. I never realized that it can be flavored too. The hummus had a distinct flavor of Pumpkin puree. It was quite savory and playful on my tongue. Wholewheat Pita can be a bit coarse as opposed to regular Pita but it was absolutely amazing with this hummus. 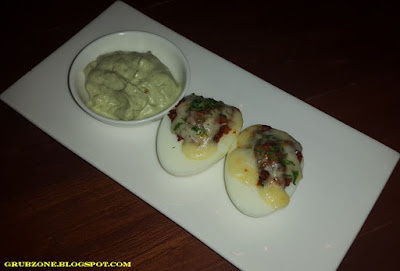 Egg Whites stuffed with mince Lamb is taking health food to the next level. Apart from the small amount of cheese used, the ingredients on this are quite healthy. The egg whites tasted like a soft jelly shell which gave way to a delectable minced meat within. The meat is salty and the cheese lends some flavor to it as well. Though it's usually supposed to be served with Mint chutney, I was served the same with Mint Mayo. Mint mayo is one of my favorites so I won't complain but Mayo should ideally be avoided in an all health menu.

Captain : This is quite full of proteins eh?

Crewmate : It be such a simple affair Cappy, why didn't we think of this before?

Captain : Because we eat too much lad and we have no time to think about cooking. 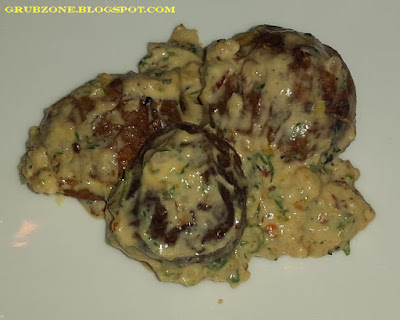 Chilli Cheese potato was perhaps the only low light of the day. This item was a regular fixture and not a part of Boveda's health menu. The potato tasted a bit raw and the cheese and spices could not lend their flavor to the unruly tuber. The flavors instead of blending into one entity were all running into different directions making this dish a passable affair. 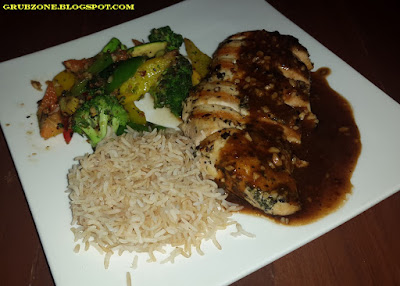 Grilled Chicken breast is a preparation that is strangely present on both their regular and healthy menu. Upon asking the difference, I was told that potato mashing in the regular fixture is replaced with brown rice. The grilled meat seemed to have skin and was loaded with pepper sauce. The sauce supplied most of the flavor to the preparation as it tasted salty and savory. The fragrant rice provided the fiber, the chicken proteins and the soft wok tossed greens everything else.
I enjoyed this dish since it is one of my favorites though I did feel that the meat could have been a wee little bit rarer.

The pricing seems to be at par with pub outlets like BBC, Harrys and the like. Thus its well within the reach of most. The healthy menu for its part is well worth the buck spent.

The service is a bit "relaxed" if I could put it correctly but its still professional and the servers know their  dishes.

I don't carry a calorimeter when I go out for food so I cannot tell how healthy was the food but what I can attest is that the food was quite tasty. The menu was interesting and my afternoon brunch was quite fun. Relaxing brunch in the day, Party at night. Boveda seems to have something for all kinds of folks.

"Methinks that this was quite the vault of plenty eh. And you lads are not looking sluggish from yer binge either. Good, Good no excuses and onto your positions now."


-I was invited to try the special health menu by the restaurant's PR. Thus food was on the house-

Posted by Rishabh Mittal at 5:12 pm