Grillin it up at the Zulu Terrace - Andheri West, Mumbai

The day was hard as me men fought the dastardly Kraken which was trying to rob me ship's possessions with its many arms. We managed to sever many of its tentacles and forced it to retreat. But we know that it will raise its ugly tentacles again someday. An epic battle however demands an epic meal. Me men were tired as I took out me looking glass to scout for places in this part of the sea.

I saw something in the distance. Located on the top of a house was a rooftop restaurant. Fancying the need of good grub with some fresh air, I fired a roped harpoon from my ship till it stuck to the side of the restaurant. Then I turned to the lads "Fancy climbing across the ropes?"

Zulu Terrace is located in the food district of the Southern Suburbs, Andheri West. Its near Lokhandwala and Fun republic. It could be difficult to spot the place since it lies inside one of the many lanes adjoining the  main road. So that certifies it as a hidden place. But is it a Gem or something else? Well, read on mate. 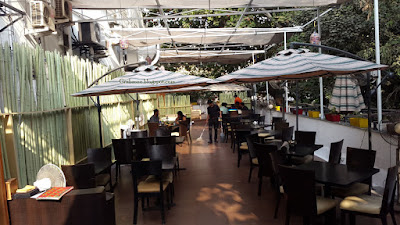 Zulu Terrace is a rooftop cafe on a small building. So its not a place for the view. Its a place for the feel. Being surrounded by trees gives it the feeling of being surrounded by a forest. Though, I am pretty sure that is not what inspired the Zulu name. The restaurant serves Shisha(hookah), drinks and good grub. One can say that it has everything under one roof. Or over one roof ha.

I was invited by head chef Dionysus Lobo to sample some of the grub and he personally curated a course for the good ol' Captain. 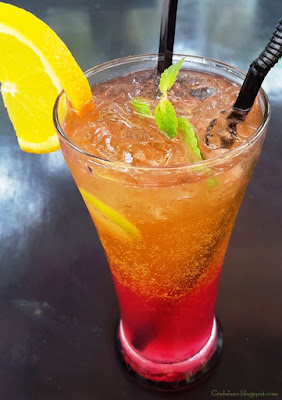 Orange Melon Cocktail was made by mixing two fruit juices. It was sweet, tangy and rather refreshing. It even looked colorful to top it all. One could say that this was the perfect drink after an excruciating trek in the urban jungle.

Captain : In the Jungle, the noisy jungle, the lion sips tonight.

Linguist : Isn't it mighty instead of noisy and sleeps instead of sips? 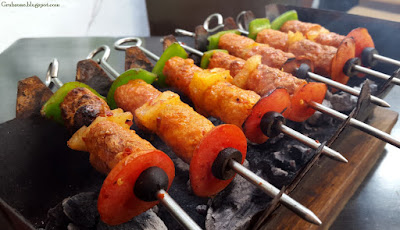 Chicken Espetada is a chicken version of a famed Portuguese dish (The original has beef). The minced meat skewers tasted wholesome and flavorful. Being grilled on a charcoal spit rotisserie also infused the flavor of an outdoor barbecue onto these. The aroma was "ah so divine". This goes very well as grub on its own but is the perfect thing to pair with Beer or whiskey. It was the ideal thing to eat on a machan during a night safari. 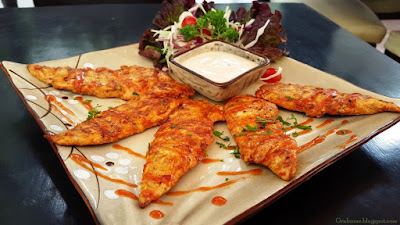 Peri Peri Chicken is a dish that is African at heart but colonial at creation. This dish was made by Portuguese colonials in Angola using the Pili pepper found in Africa. For us Indians, this pepper is relatively tame. It tastes like a savory herb which boosts the flavor of anything its rubbed on. This Afro Portuguese dish was thus a twist to the satay like chicken strips. It was mildly spicy, pleasantly fragrant, savory and had a bit of Thyme sweetness. Great grub to offer to the chiefs of the opposing tribes or your office mates on a break ha.

Hazari Kebabs. These soft four hour marinated chicken kebabs melt in one's mouth coloring the palate with cream, cheese, powdered cashews and spices. Have these and you would never want to eat other kebabs again. These kebabs were a divine sensation for me tongue. Ahh, I salivate as I write about them. Works well as a reward after a long hunt in the suburbs.

Captain : This one is for me, This one also for me and this again for me.

Linguist : Why don't you leave me a piece too, old chap?

Captain : I did leave you a piece. Here.

Linguist : But that's just a tiny sliver of onion. Not even a Kebab. 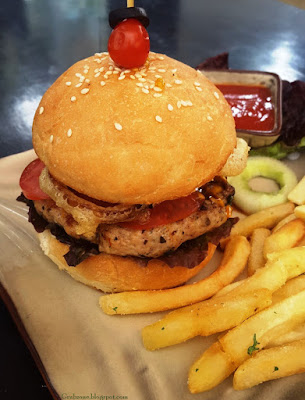 Jack Daniels burger. This burger had a sauce which was fashioned out of Jack Daniels whiskey hence the name. It was full of fragrant sweet jus which came out as I took a bite. The burger was messy but full of flavor filled meat. It was priced slightly more than the Dunkin Donuts Tough guy burger but was several levels above it in flavor.

The only problem that I found with it was the liberal use of thick onion and tomato slices. These tend to interfere in an otherwise pleasure filled burger experience and thus the slices used must be kept very thin. Served with a side of fries, it makes the ideal grub before a long noon in the Savannah. 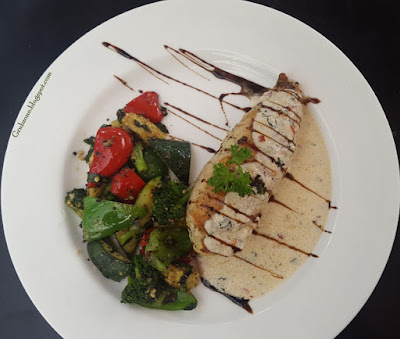 French Rolls. This Chicken and spinach concoction rested in a bath of delectable and creamy Ricotta. This was part of a special "dish of the day menu" at Zulu Terrace. It tasted similar to Roulade and was full of proteiny goodness. Though this has no connection to the Jungle, it serves well for the soft footed tourists on elephant backs.

This was but a small part of the grub menu at Zulu. The whole menu is massive and there is something for everyone. Whether you are a hungry lion or a raging Rhino, the menu will always please you. Currently the only thing that the menu lacks is a dessert section but I am told that the management will introduce that shortly.

The pricing is very affordable. It is cheap for the good quality of food served. It is the kind of place where one can chow down on fine food everyday without burning a hole into their pockets.

I cannot comment much on the service since I was invited to have a meal here. But it seemed to be satisfactory from what I could observe on other tables.

Despite not being a fine dine or a place with an elegant ambiance, this place had a special charm to it. As I mentioned earlier, the trees made me perceive that I was on a machan in the midst of a tropical Jungle. The food was better than most similar places that I have been to. It was good enough to plan a second trip here. As a suggestion, the management could add a bit of some Zulu music to really get people in the mood. And perhaps a bit of bush crickets.

"Its time for the hunt lads. We are back in the big game. Harpoons out and let's challenge those Krakens and Leviathans."


-I was invited by the Head Chef to sample the Grub. My post however is neutral and based off what I felt.-

Posted by Rishabh Mittal at 8:57 pm