Due to trips to distant lands, I discovered that I missed things close to me home. In all the time that I was away, many restaurants had popped up in the islands around. So it was time to explore me native seas once again. The first place that I found was a restaurant called O:h cha. I had no idea what that meant till my linguist told me that it means delicious in Thai. I keep forgetting about that linguist. How did he get into me crew? Story for another day.

O:h Cha cha cha cha. The odd name means "delicious" in Thai. This place is located at a walking distance from home and yet I never knew how close this was. Its been a busy time in the past year with treks all across town to different eateries. Its funny how I missed exploring some of the finest places in my own neighborhood. Well no matter, the process of rectification begins with a new culinary adventure. 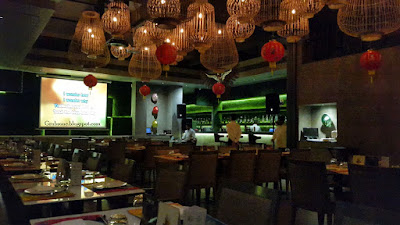 I managed to arrive here on a day designated as a Karaoke night. Although the shy Indian public is not generally the "sing in front of a crowd while drunk" kind, there were a few folks who tried crooning. Not me though, this pirate was intoxicated on rather strong Rum. The place is small but has a nice ambiance. It felt  like both a lounge and a restaurant rolled into one. The Green lighting and the fancy light work on the ceiling makes the place feel quite comforting.

The place was commemorating the Chinese New Year (Year of the Red monkey) and had a special menu in that honour. Now, CNY sounds like an odd thing in a Thai place but I guess it was generally an "Asian" celebration.

I was invited to sample the special menu by the restaurant's PR folk. And bless those people for making me acquainted with a rather nice Thai place close to home. Do note, a pure vegetarian may not form the best opinion for this place. A meat eater however will enjoy the protein filled fare. 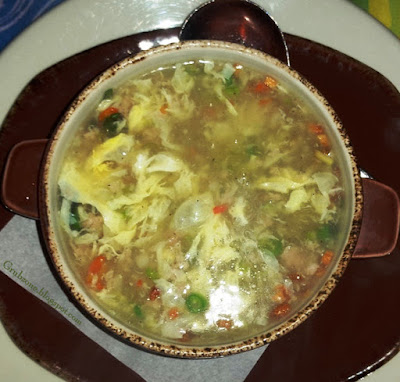 Burnt Garlic and Basil Chicken Soup. This soup visually resembled colorful Asian soups. The flavor was mildly salty upon tasting but had a very spicy undertone which was perceived while swallowing the liquid. I love spicy food as the next guy but I personally felt that the spice was a bit high for Thai cooking. 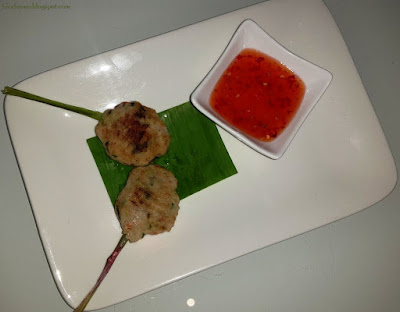 Grilled Prawn cake on lemon grass skewers. Despite its simple appearance, the prawn cakes were quite sumptuous. These had been dusted by Kaffir lime as well. These were soft and full of flavor, almost like an oriental version of Kebabs. The lemon grass skewers were added for pure aesthetics as these could not take the cake's weight, ha.

Captain : This isn't a regular pop.

Crewmate : It is a cake pop

Captain : Indeed, but not the ones hyperventilating kids with smart phones would love.

Crewmate :  But everything a sailor would love.

Captain : Aye to that. Hey, where are the skewers. 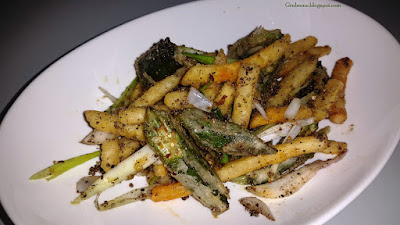 Hoi Yin Yum Prig. This is a snacky kind of an appetizer that works well with strong drinks. The Okra however felt a bit invasive due to its size. I felt that smaller pieces of Okra would have worked better than the large chunks used. It also affected the cooking. The outer portions of the Okra were crispy, savory and crunchy but the core was soft and gooey. Given the theme of this dish, I am pretty sure the crispiness should have been in and out uniform for the Okra. 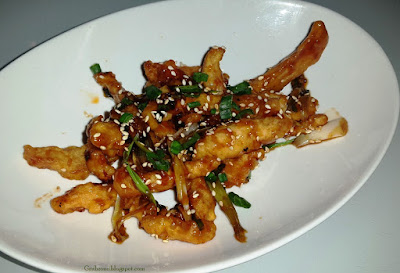 Thai Honey sesame chicken was a flavorful dish of chicken strips coated with its namesakes. The flavor mimicked the sweet Chinese honey Chicken with savory depth coming from other spices and sesame. This appetizer had an addicting and a tantalizing feel to it. I had already cleaned the entire plate a minute after I took my first bite. It makes an ideal appetizer to a multiple course meal. 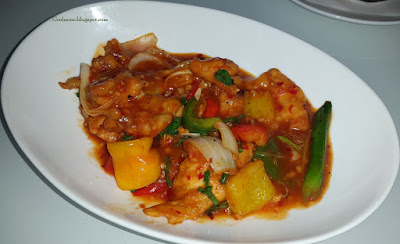 Chicken with Chilli Garlic Sauce. I usually avoid safe/old favorites options when I am invited to places. It is all about experimenting new things after all. However, my server recommended this dish to me. And I gleefully accepted his suggestion. This colorfully piquant preparation had just the right amount of spicy earthiness. The soft chicken chunks had completely absorbed the garlicky flavor. It would go well with any noodles or be enjoyed independently. 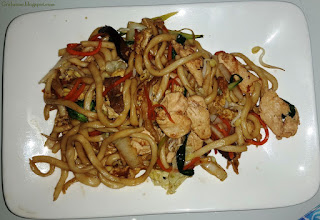 Yaki Udon noodles were served in the traditional Japanese style with sauce, meat and vegetables. Though not the best variant of udon that I have come across, these were certainly better than mediocre replicas sold in the name of Udon at many places. 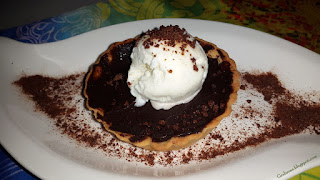 Chili Chocolate Tart with Coconut Ice cream. One may have heard of Nainital, but this was truly Nainitart. This tart and its plating resembled an eye from the top. A tasty fusion of east and west, this mildly spicy chocolate tart had chocolate soil and a scoop of creamed Coconut Ice cream in the center. The coconut obviously is a tribute on Thai flavors. The tart was soft and the rich chocolate paired well with the ice cream. The chili provided an interesting flavor undertone. Enjoyable treat to the last bite.

Captain : It be a dark chocolaty night . Me ship sailed silently towards Mt Coco Cream.

Crewmate : Uh huh and what happened after that?

Captain : Deep below this sea of Chocolate, lied a subtle treasure of spice.

Captain : And I relished as I had the last bite. (smirks)

Crewmate : That feels out of place...HEY, you weren't high. You faked it to distract me.


The service seemed to be excellent and the serving strategy well chalked out. Despite having a few servers, they were able to address every table fairly on a crowded Karaoke night.

The pricing seems to be on par with other Asian fine dines like Main land china for example. The portion sizes seem generous too (Note : My mains were half portions by my request.) Though I do feel that the appetizers can be 350s instead of 400s and 500s instead of 600s.

A great place for authentic Thai cuisine. The new menu is fun and the desserts are not to be missed. The new menu goes well beyond the Thai only theme and adds a few other Asian delicacies. It is the Chinese year of the monkey theme after all. If the reader loves singing, then I recommend a Wednesday visit for Karaoke nights.

"All right lads, now we Cha cha cha with the stars and the waves. The tail winds be on our side. Put that grub and Rum to good use. "


-I was invited by the restaurants PR to sample the new menu. My post is neutral-

Posted by Rishabh Mittal at 4:40 am