I remember these parts of the sea. This is where we first met the Kraken many moons ago. Maybe our battle with the Kraken a few days back was a hint towards our return to these waters. It all began with a call on me radio. It talked about Persian food and what not. Eager to try Iranian food, I charted my course to a remote island away from civilization.

A magnificent palace stood on this desolate island in the midst of trees. We docked near the beach and embarked on a mission towards the palace. The Royal court and Persian food awaited us. 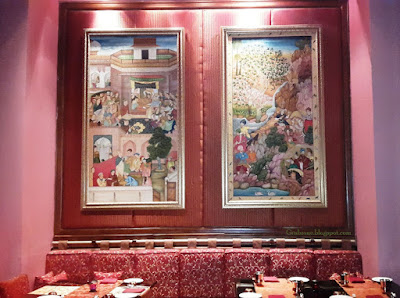 Nawab Saheb at Powai is well known for its Mughlai food. But surely Iranian food is a different sphere? Right? Not quite.

The evolution of the Northern Indian Mughlai cuisine is an interesting tale. Iranian food along with Turkic food has been a part of the colorful Mughlai culinary tapestry. In short, Persia is the place where much of Mughlai food predecessors were actually born. Nawab Saheb at the Renaissance brings a festival of Iranian food which lasts till the end of February, 2016. It is an event that takes one along the silk road to Iran itself.

I was invited to the restaurant as part of a FBAI Blogger's delegation to sample this exotic grub. 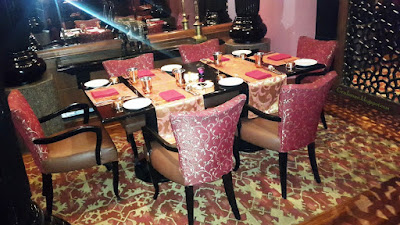 Nawab Saheb has an ambiance that mimics the royal Mughal courts or Darbars. The environment is rich. The exquisite Kaleens(Carpet) on the floor, the vermilion hues, Mughal themed chairs and the intricate wooden frames - All of it turns time momentarily back to a forgotten Golden age. One almost feels like they are royalty of some kind. 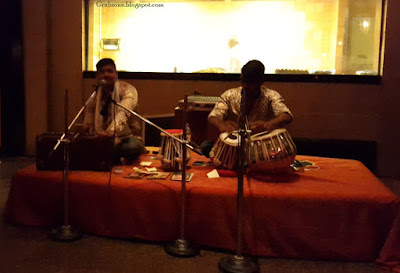 And what good is a court without classical musicians, right?

The event is curated by Chef Haleem and Chef Mona Poordaryaeizadeh(Who has specially flown in from Iran). This is my first time with mainstream Iranian food so I will have to trust Chef Mona for the authenticity of the food.

The food is served in special set menus. A patron may choose the set they prefer the most. A Vegetarian set, a Meat set, a Seafood set and a mixed bag set are offered by the restaurant. The prices range from INR 2000 to INR 3500. 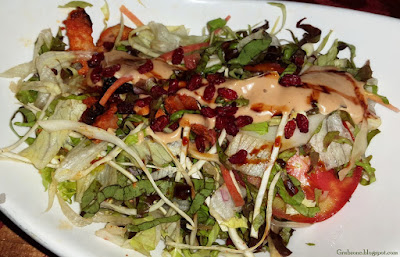 Though not part of the Persian sets, this Zafrani chicken salad caught my fancy. The tandoor roasted chicken chunks and the greens provided a perfect appetizer before the main courses. And it was quite visibly pleasing as well. 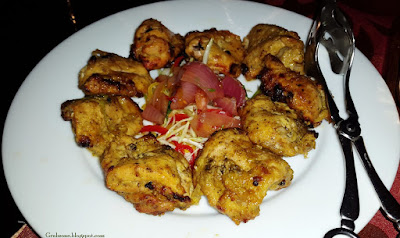 Joojeh Kebab is a popular Iranian dish. Made with Fresh and tender saffronized young chicken, this dish excelled on all fronts. The appearance was appetizing, the aroma divine and the flavor was amazing. These juicy chunks literally send the taste buds on a high.

Captain : These Royal Kebabs are truly meant for a Captain. 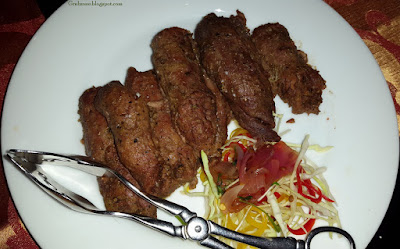 Kabab e Barg - These juicy Lamb fillets were made out of lamb shanks. A rather simple construction, it was the Kabab's sumac and saffron seasoning that ultimately created its unique flavor. Though these taste very close to Indian Lamb kababs, the subtle differences were perceivable. Sumac for instance is rarely used in Indian cooking. 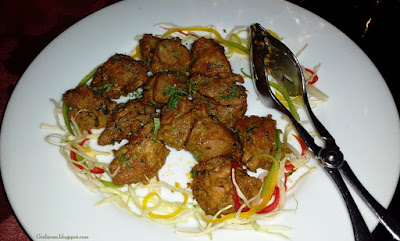 Kabab Hosseni had a tantalizing aroma with high piquancy. These juicy lamb nuggets were seasoned with a mixture made out of Tomatoes, saffron and a green pepper paste. These were quite addicting and second only to the Joojeh Kababs. 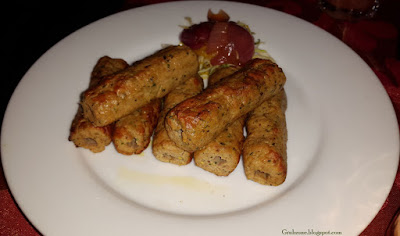 The Koobideh Morgh Kababs differed a lot on visuals from what I saw on Google. These skewered Kababs were made out of minced chicken cooked with an onion-garlic paste. The aroma was not as captivating as the other kababs and I felt that these tasted a bit dry. It was difficult to eat these without the green mint chutney. 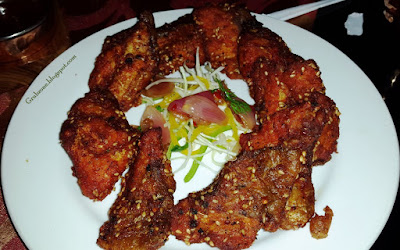 Maho Sorkh Kardeh was Pan fried Basa rubbed with fenugreek seeds, pepper and dry lime. The admirable thing about these kababs was the fact that the flavor had sunk in properly into the Basa. The disappointing thing was the usage of Basa in the first place. Any other fish fillet would have tasted better than Basa. 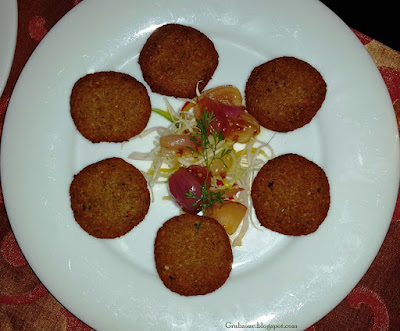 Abadan Falafel is a Persian version of Middles east's favorite Chick pea patties. While the appearance was very refined, the flavor was a bit rough. To me, a good falafel is one that tastes remarkably different from an Indian Moong dal vadi, despite using the same chickpea base. This variant could not make that distinction.

The main course felt a little disappointing as opposed to the Kababs. This could be due to many reasons. Maybe my palate could not perceive the subtleties of the Persian mains or perhaps it was the common issue that happens with most Kebab serving restaurants - People dislike anything outside the Kababosphere. 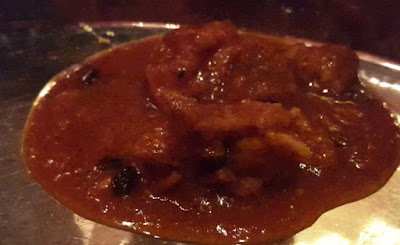 Khoresht E Khalal Badam - I actually had to Google this before writing about it. Every single image that Google threw up made it appear rather visually pleasing. The variant here in comparison appeared like a damp squib. The billed Almond(Badam) slivers were too few and had become too soggy to stand out. The dish was also missing its trademark tangy flavor and tasted too close to an Indian lamb curry. 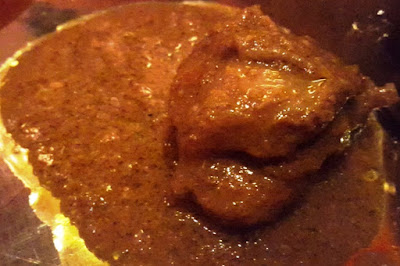 Khoresht Fesenjan appeared a little lighter than I expected. This is usually a dark(almost brown) colored stew. The flavor however worked well for me. It was made out of chicken, pomegranate sauce and walnuts.The flavor was a fusion of savory and sweet. The spices also created a unique aftertaste in the mouth. This was a flavor, I had never tried before. The dish thus gave a thrill of discovery.
I would like to try this dish with duck(The traditional recipe uses duck) instead of Chicken someday.

Captain : This stew has some nice sensations on me tongue.

Crewmate : We discovered something new. A Stew.

Captain : That be true lad, lets plant our flag on it now and give it a name. 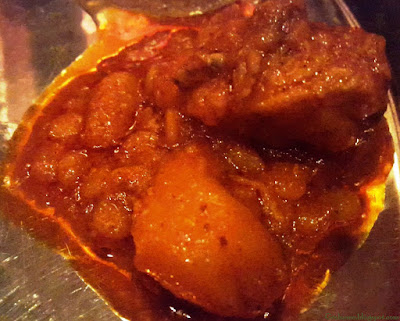 Khoresht Aloo Mosama is a chicken stew made with carrots and prunes. The flavor was acceptable but was a little too sweet for my liking. Pardon me for the horrible image, the dish blended in with the scarlet lighting. 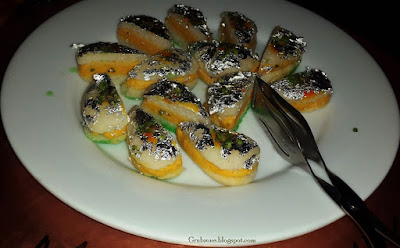 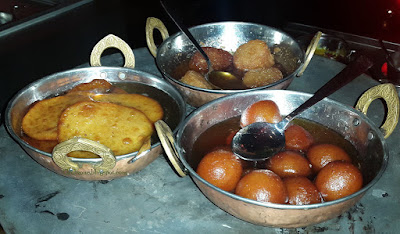 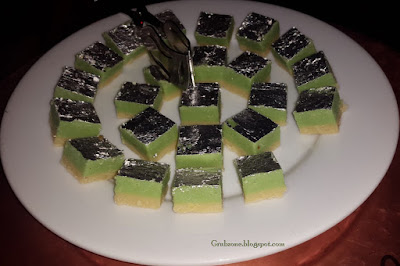 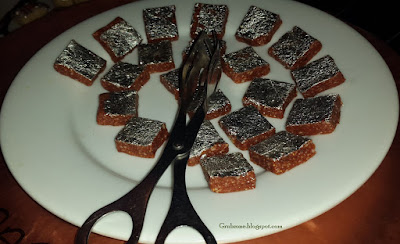 The desserts were fun but sadly these were all Indian. I did expect Persian desserts and had to ask twice to confirm whether these were indeed the correct desserts. I was looking forward to things such as Masghati.

The service was excellent, as was expected of a restaurant inside the Renaissance's premises. The serving crew was professional, routinely changed cutlery and ensured that empty water glasses were filled as soon as possible. At no point of time did I ever require to instruct them anything.


The pricing for the Persian food ranges from INR 2000 to 3500 depending on the set chosen. It feels high but how often does one find Iranian food in India. Coupled with the rich ambiance of Nawab Saheb and the professional service - the pricing feels worthy.

The food had its ups and downs but the experience certainly was unique. Even as a slightly above mediocre food traveler, I rarely come across events such as this. In normal circumstances, for a genuine Irani experience - I would either have to go Iran or at least Dubai. But an event like this brings it all to my own city and reduces air fare to cab fare.

The Persian Festival ends on February 27 ,2016. If you are in Mumbai, visit The Renaissance and be Royalty for a dinner at Nawab Saheb.

"Shame, we have to leave this island. There is so much left to explore. Mark it on the map lads. We will be back, soon."

-I was part of a Food Bloggers Association of India Meet up organized by the Restaurant's PR. My review however is objective.-

Posted by Rishabh Mittal at 5:32 pm